Glycogenolysis is the process of degradation of glycogen to glucose 1 phosphate and glucose in liver and muscle. [9] Glycogen serves as the storage form of carbohydrate in our body corresponding to starch in plants.

When there is more supply of glucose to our body, immediately after meals, it gets stored in the form of glycogen in liver and muscles.  The stored Glycogen comes to rescue when the blood glucose drops down, a situation which prevails between our daily meals. [1, 2, 3] 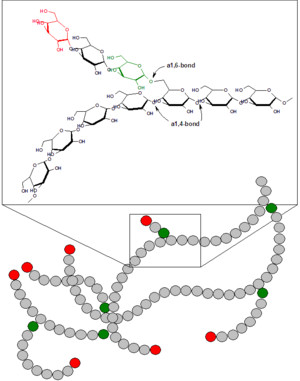 Glycogen is a homopolymer made up of repeated units of α D glucose and has an appearance of an extensively branched tree. 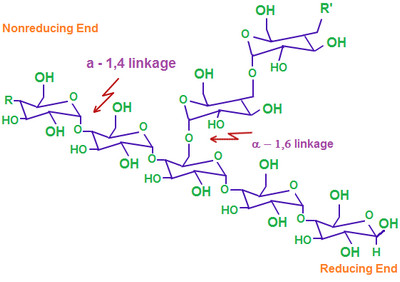 Glycogenolysis happens in the major storage organs of glycogen – liver and muscle, when the body is need of more energy or when the blood glucose is low. Glycogenolysis is not the reversal of Glycogenesis.

It is catalyzed by different set of enzymes. In this process, the linkages between the glucose residues are broken down, forming glucose 6 phosphate or free glucose so that it could be used for producing energy.

The key enzyme of glycogenolysis is glycogen phosphorylase which is aided by another molecule called pyridoxal phosphate. This enzyme cleaves the glucose residues sequentially and yield glucose 1 phosphate.

This cleavage is known as phosphorolysis [9] which continues until 4 residues are present on either side of a branching point. The resultant smaller and less branched glycogen molecule , Limit Dextrin. It cannot be broken down further by Glycogen phosphorylase.

What does the Debranching enzyme do?

Debranching enzyme is a single molecule consisting of 2 enzyme activities – α – [1→4]→α-[1→4] glucan transferase and glucosidase. The first enzyme activity removes the glycogen fragment containing 3 or 4 residues in a branch and move them to a nearby chain.

This involves breaking up of 1→ 4 glycosidic link in one point and the formation of the same at another point on the molecule.

The second enzyme activity breaks the 1→ 6 glycosidic link at the branching point and release free glucose. Once the branching is lost, remaining linear fragment of glycogen is available for the action of phosphorylase and the process continues.

The end products – glucose and glucose 1 phosphate are formed by the combined action of the two enzymes -debranching enzyme and gllycogen phosphorylase.

As muscle lacks this enzyme, the glucose 6 phosphate is diverted to glycolysis, which is a process that provides energy to the cells.[1,2]

Defect in any one of the steps in glycogenolysis results in accumulation of glycogen in the cells resulting in a group of disorders called Glycogen Storage disorders causing damage to liver and muscle. This occurs mainly due to deficiency of the enzymes. [4] 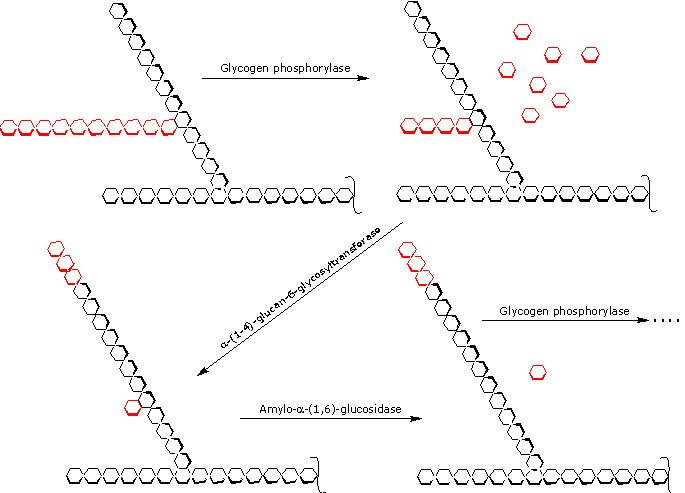 These hormones act through an intermediate molecule called cAMP which is necessary for the activation of Glycogen phosphorylase. This mechanism is commonly found in liver.

In muscles, only epinephrine causes effective glycogenolysis and in muscles, there is increased calcium inside the cells during muscle contraction .

This also results in activation of glycogen phosphorylase through a series of complicated reactions which does not involve cAMP. Epinephrine is the hormone of fight, fright and  flight. [9]

When there is excessive glucose or intermediates of glycolysis like glucose 6 phosphate or ATP, the energy currency, glycogenolysis is inhibited and the metabolism is shifted towards glycolysis and Glycogenesis.

Difference between Glycogenolysis and  Glycogenesis

Difference between Glycogenolysis and Gluconeogenesis

Animation and Video on Glycogenolysis

This health website is for informational purposes only and Is not a substitute for medical advice, diagnosis or treatment.